My mom and I had another patina day! We were very pleased with the results. I also tried an idea I had with Mod Podge and was super pleased that it turned out as well. So, I will just get right into the show and tell.

I got one of these lily of the valley stampings from Sondra’s Estate Beads Destash Depot. I have gotten a lot of great things from Sondra, so check out her page if you have a minute. Tons of stampings for sure; many of the older really quality, heavy duty kind. Anywho, I forgot to take a picture of mine nekkid, so Sondra let me use hers. I used Vintaj patinas in marble and a mixture of moss and seafoam pearl for the green. I used the Vintaj reliefing block because I always like stampings to look old.

My mom patina-ed another lily stamping I got from Sondra with the same colors. Here are the original and color versions, with the original once again by Sondra Jackson.

I didn’t go in with a solid plan for this pewter dragon fly focal by Fire Goddess that I got from Andrew Thornton’s destash. I kept changing my mind, but in the end I think it turned out kind of fun. Here are three quick pics: the original pendant, with bronze patina and some reliefing, with white gold, ochre, and carnelian.

I guess I didn’t get many before pictures. My mom had a silver face pin that she patina-ed with verdigris, ochre and cinnabar mixed with garnet. Here it is in progress and finished.

My mom also had an old brass vase stamping; here is a picture in progress and finished. 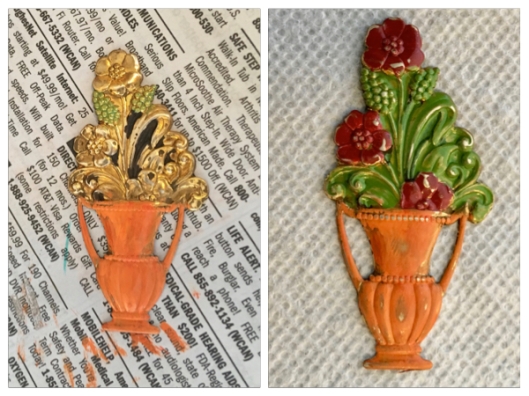 I had these fish I was just going to lightly patina with sea colors, but they were smoother than I first thought. The patina didn’t take well, and I would have had to rough them up. They are way too cute to even consider doing something that could ruin them, so I decided to leave them as is. I just wanted to include them to say that not everything ends up needing patina! These are also from Sondra Jackson.

The last thing I patina-ed is some copper chain. I thought it was a good candidate because it was so heavily textured, and I didn’t really like it that much in its natural state. I have a pendant I want to use it with, and I chose moss patina. Here is a picture of the patina (right) and then after I reliefed it (left).

I cut the chain, so I had some extra bars. I said I was going to throw them away because I can’t keep every little thing – that’s why my studio is the way it is (giant mess). My mom decided to keep them in case I needed them at some later time. Not minute later I broke one of the bars being a little too rough with my reliefing. My mom was able to hand me one of the spare bars (that I had tested the patina on, so it was already done!) and I fixed it. My mom is the smartest!

One last thing I did was Mod Podge some old flowers I have onto a wooden bead. Hope Smitherman’s blog showed a project with washi tape earrings. I think that in combination with another project I saw but really can’t remember made me think about a little table I Mod Podged with tissue paper. It turned out so cute! I figured I could do that on wooden beads. I looked through my paper craft supplies, and I really wanted to use some old flower items a friend had given me. I got the wooden beads from St. Katherine’s Supply Co. 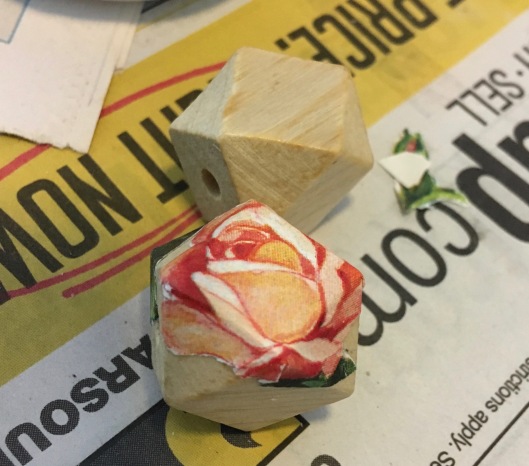 And here is the finished product in my first ever video on my blog.

Whoo! That was a long post. I hope you enjoyed it! You will be seeing these items turn up in finished jewelry in the future.

5 thoughts on “Another Patina Day and Mod Podge”