I saw this bird queen pendant when Gaea showed a preview of some upcoming listings recently.  I really wanted it and was a little amazed when I got it.  Her pendants (not only the birds) fly right out of her shop or Facebook almost as soon as they are listed!

Soon after, I was doing a little shopping with Allegory Gallery and saw the perfect periwinkle shade of Czech glass beads to go with it. I found some orange/red Czech glass in my stash along with a few bone colored German glass beads that would look great in the design as well.

I was taking my materials on a visit to my parents, and I had some fabric and wire components from Anna Pierson of SagaHus.  As soon as I showed her my choices, my mom picked these out as perfect, and they are.  She gave me a few antique ivory beads she had lying around and ta-da!

I also used a clasp by Gaea.  I really love how it turned out!

Today is the reveal for the Allegory Gallery Design Challenge – Midsummer edition. 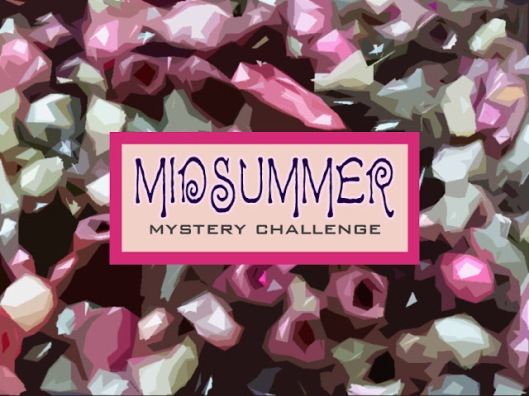 I love even the picture above of the kit. Such beautiful colors! The theme is lovely – Summer Solstice and Faerie folklore.  Also, just from my own midwestern perspective, midsummer is a time when we can count on it being consistently warm and there is still time before the snow flies. OF COURSE, I forgot to take a picture of the kit, but I will point out what I used, so you can get an idea.

First I used a strand of rock crystal quartz beads, purple seed beads, purple waxed linen, pink and purple crystals and a lucite flower from the kit.  I added a copper and resin art pendant and copper clasp from Gaea Handmade. 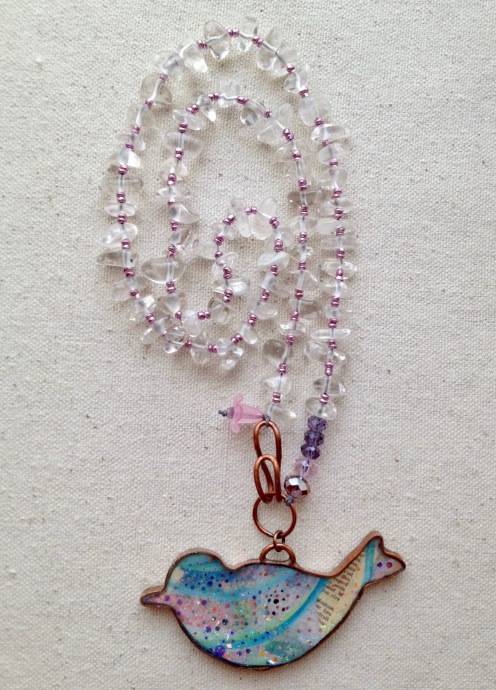 I hope you agree I’ve achieved the funky and romantic look I was going for.

Next I made a bracelet. I was looking for something else and found this little length of plastic chain. I thought it would be great with some of the larger plastic beads from the kit.  I threw in a tin bead from Trinket Foundry and made dangles with kit beads. Cute and chunky. 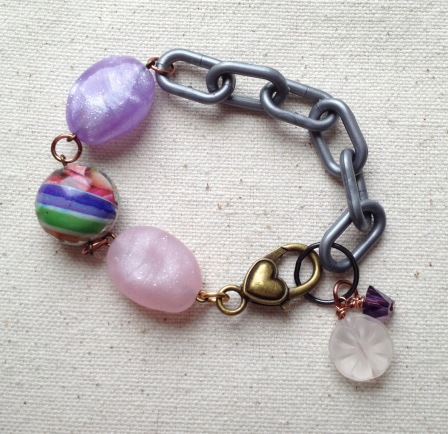 I had another design in mind for the necklace with Andrew’s handmade component – multi-strand with smaller beads and some fiber. I was going to put one larger amethyst above the pendant. When I got out this strand of matte amethyst slabs, it was clear they were the necklace. I used a pretty Green Girl Studios clasp.

I branched out a little more than usual, pulling in more things from my stash. I had a great time! Please visit the Allegory Gallery Design Challenge Facebook page to see what others have made.  Thanks to Andrew and William for another beautiful kit and fun challenge!

I continue to try to use some of my stash as well as put away and clean up everything in my studio so it’s all organized.  I waver between the two, sometimes starting a project, pausing to put away some beads and supplies, and then going back to work.  I just enjoy being in the studio.  I do want to make more work space so I can try some new things, though.  So here are a few beads out of the way.

I have had this Gaea coffee pendant for a while.  One of the great pleasures in my life is my morning cup of coffee, so I love this pendant.  I wanted to make it into a simple necklace with some pretty beads, and I found the right ones in this strand of faceted tiger’s eye.  The picture doesn’t do them justice; they have so many beautiful colors!

I also had a variety of large hole irregular glass beads I really love. I had this idea to cascade them down the front of a necklace on large jump rings.  I used some old glass cubes and some rondelles that happened to be in the bag with the large holes beads for the strand. Part of my design aesthetic is “try whatever happens to be nearby.”

I also started another necklace I’ve had in mind for a while, but I might have to do a little research to see how to make it work out the way I want.  I’ll spend some time on that and more on putting things away and organizing. I need to do another haul getting rid of stuff.  There’s just not enough room for everything if I want to have space for trying new things.

I love Gaea’s beads.  I have amassed quite a collection.  Recently, she has started selling some etched metal as well, which I also love.  I was lucky enough to snag a bracelet bar on her Facebook group which can be fast and furious when she lists.  I know a lot of people don’t, but I’ve come to actually like that competitive shopping mode, although there was a time I didn’t.  But, the great thing about Gaea’s auctions is, she will also do a made to order piece for you if you miss something you want. I’ve noticed several artists I like doing that now, so if you don’t get something you want, ask!

Anyway, back to what I’ve made with some of Gaea’s beads. The bracelet bar says “adore” and the word trails into a heart at the end.  It was hard to get the light just right to show the bar to its best advantage since it is curved.

I’ve also used four of her ceramic beads, a pretty striped glass bead and my last little herkimer “diamond”.  I often feel like I don’t have the right clasp for stuff. The first look through my box of clasps didn’t yield anything I was thrilled about, but then I looked again and found this dotty copper hook that I think is perfect with Gaea’s dot etched bar!

I’ve really been trying to use more of my art beads lately, and it’s a lot of fun. I try not to get panicky about “running out”.  I know many of you reading can identify with that irrational fear.

And now for a public service announcement.  I am temporarily keeping my sister’s cat which is a lot of fun.  I put my main photo background paper on the floor when I was trying a different background.  If you have an animal in the house, don’t do this. 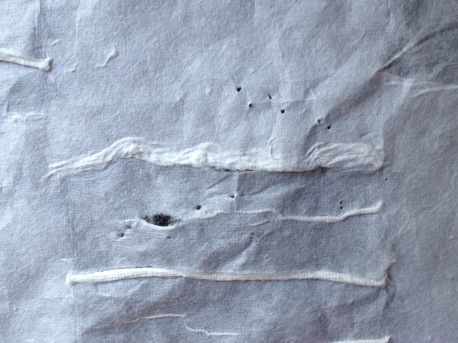 It was already looking a little worse for wear, so I need a new one anyway.  I hope I can find something I like as much.  I like the subtle texture that provides interest but isn’t too distracting.  When I get the new one, I will put this one out for the cat.  She was sleeping on it earlier.  Apparently she likes it too!

Gaea Cannaday, one of my favorite bead artists, sells beads in various venues, and one of them is Lima Beads.  Gaea Handmade has new spring/summer colors and styles available on the Lima Beads website and to celebrate there is a giveaway of some beautiful pieces! 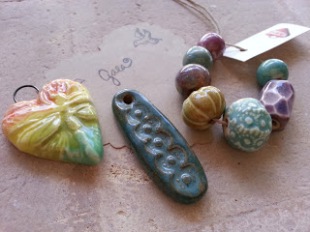 Want to win these?  I know I do!  To find out more and to enter, please visit the Gaea Handmade blog for details.