I recently bought a gorgeous necklace from Patti Vanderbloemen.

She makes beautiful handcrafted jewelry and all net proceeds go to the Miracle Horse Rescue organization.  With my order, she very generously gifted me some beads she thought I would like based on what she has seen on my blog.  She was right!  And I’ve already used two sets she sent.

I am also a huge fan of Staci Smith‘s beads.  Just after I received the beads from Patti,  I got a fabulous peacock feather pendant by Staci.  I immediately thought of some lucite barrels Patti had sent that were the perfect color family for the pendant. I made a rough beaded chain with dark annealed steal wire.  I also added one drilled beach stone I got from Martha’s Ruby Acorn and a clasp from Saki Silver.

I’m very pleased with how that turned out.  So then I was on a roll, and the beads Patti sent were sitting right there (except some turquoise squares with a swirl on them that were on another table already slated for a project!) I had a vintage bracelet link with a faux shell background I had gotten from Shipwreck Dandy Supply that I had planned to use in a necklace with some white rounds (MOP? faux shell?) and accent crystals.

I also planned to hang a floral pastel butterfly made by Vincenza Fazz of Earthly Beads from the bottom of the bracelet link. This necklace takes me back to my past. Long before I got heavily into art beads, I was in love with used and one might even say garish pieces that could be repurposed.  I love ornate.  Gold! Flowers! Enamel! Crystals! Scrollwork!  Who could resist?  Well, many, but not me!  I also love vintage beads, especially if they are an unusual shape or color. Enter vintage twist beads from Patti!  Even though they are vintage, they are very like serenity blue, one of the Pantone 2016 colors of the year along with rose quartz.  So now I have these great vintage beads that go with a project I’ve already got planned out, and they are one of the colors of the year!  This was just kismet.

I had originally thought I would make a beaded chain, but I am so lazy about those; that’s why the beads were still sitting around.  So I decided they were really waiting for the vintage blue twists and gave myself permission to put it all on waxed linen.  So easy!  I added a fancy toggle, and I’m so pleased by this unusual necklace.

Thank you so much, Patti! I will be using the beautiful beads you sent me in many more fun projects. 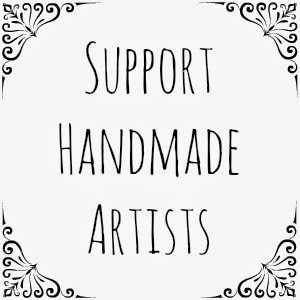