I never thought that two very different parts of my life would have reason to come together on this blog, but equity really is a factor in every part of our lives, including jewelry design!  As a white, cisgendered, able-bodied woman who was raised by two parents in an upper middle class family, I grew up with and still experience a lot of privilege. Because of this privilege, I rarely had to think in depth about equity.  However, in the past few years, I’ve gotten involved in my city’s Racial Equity and Social Justice Initiative and have had the good fortune to receive a lot of thought-provoking information and training through that initiative as well as things like the White Privilege Conference and the YWCA Racial Justice Summit.

Ok, so right about now you might be wondering what this has to do with beads and jewelry design.  I’ve been thinking a lot about cultural appropriateness and cultural appropriation in my jewelry and bead choices.  Around the time I started delving into these topics, I bought these beads.

As I became more conscious of things I had largely been able to ignore in the past, I wasn’t sure these beads didn’t contain stereotypes my privilege didn’t allow me to see.  I asked me sister about it; she wisely said if I was feeling unsure, there was probably something wrong, so I stuck the beads in the back of a drawer. I dug these out to take a picture for this blog and feel even more uncomfortable about them now. 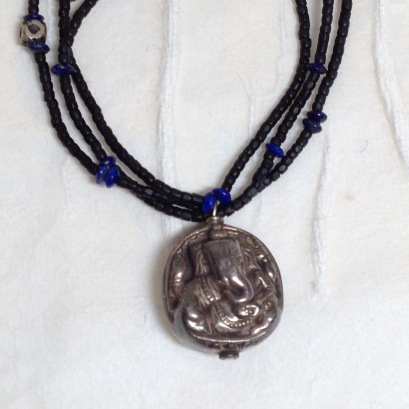 As I read more on the topic, such as this article from the great blog Black Girl Dangerous, I started to think about some pieces I had made.  Quite a while ago I had made a necklace with a Ganesha pendant just because I thought it was cool. I had read a slim volume about Ganesha, but I am certainly no scholar on Hinduism and really know very little about it. 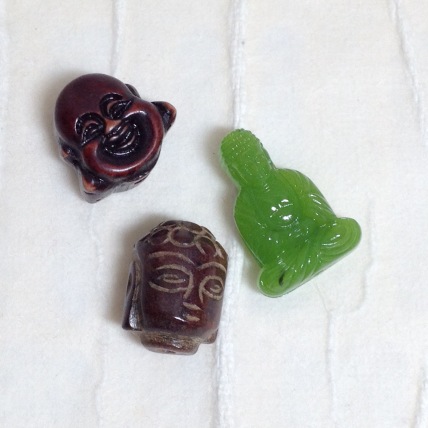 I also made a necklace with a Buddha face but have read very little about Buddhism and am not a follower.  I had always liked that image, along with the vague ideas I thought about it and have multiple beads with this depiction.  I read a discussion board and there was some disagreement about whether it was ok to wear a Buddha pendant, and that made me think of the hue and cry when Madonna used Catholic religious symbols in ways many thought were inappropriate.

I also have chakra charms and namaste pendants.  Am I taking cultural norms that are not mine and using them in a false and offensive way? That is definitely not something I want to do, yet it is very easy having the power of privilege.  I need to be intentional in my desire and decision not to do this.

At the same time, it wouldn’t bother me at all to use a charm depicting the sign for “I love you.”  Why?  I was a sign language interpreter in a past career and have a legitimate connection to Deaf culture.  Would the same be appropriate for someone who just thinks the charm is “cool”?

While my contemplations on the matter might seem trivial to some, I believe there is a discussion to be had here – with all parties at the table.  I don’t think my desire to wear something as a pretty ornament should outweigh someone’s cultural connection to a symbol’s true meaning.  I’m not saying that is what anyone else is doing because I don’t know what other people’s experiences, backgrounds and knowledge are.  But I do know about me.  As pretty as I think they are, I won’t be wearing the Ganesha or Buddha necklace again any time soon.  My sister is smart: if it doesn’t feel right, there is probably something wrong. 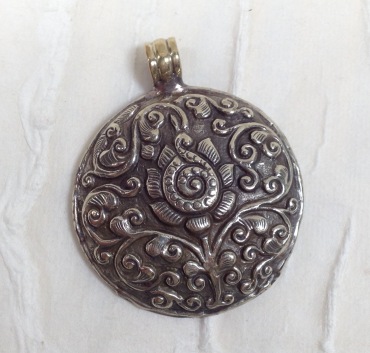 And I don’t need to use these symbols. There are so many pretty beads out there. Instead of a Buddha, I could use a carved wooden bead. Instead of the Ganesha, what about this pendant?

I’d love this be the start of a conversation.  What do you think?

4 thoughts on “What Does Jewelry Design Have To Do With Cultural Appropriation?”